The first part of the Latvian disaster is that my brother started to feel ill one morning when we were wild camping without water. He was then sick multiple times, I told him to toughen up and we cycled 45 miles until we found another suitable wild camping spot. He spent the rest of the day languishing in bed.

On route that day we spotted… A giant chair. Funnily enough, it was advertising a campsite but we decided to push on to the one we had planned.

The legs were double my height and so impossible to climb without some kind of aid. You can spot the log resting against the back but it didn’t help much. Especially as I didn’t want to break anything in the middle of a Baltic country 1500 miles from home.

Latvia has the one of the longest beaches in Europe, that stretches the entirety of the hook near Riga. It is an amazing experience to be able to walk along a beach for a few miles on a blistering hot day and not see anyone. Try it in the UK and you would struggle to see the sand.

Having cycled most of the coast around an entire sea we are well aware that cycling on sand is not worth the sheer amount of difficulty it entails. I remember speaking to one couple touring who followed signs for another eurovelo route that took them along muddy tracks and then through sand dunes. It took them over 2 hours to do 5km!

The only bit of cycling I did on sand was to cycle further away from the path and find a spot slightly more hidden away. I made sure to cycle close to the water though to get the firmer sand and avoid kicking it up into the gears.

The disaster struck me three days after Thomas. We ate and topped up with water in a town and then cycled for an hour into the forest bordering the sea. Like the start of many disasters, it was a perfect evening at the beginning. We found a spot over looking the sea and drank hot chocolate as the sun set. There wasn’t a soul in sight and the view was stunning.

But then I felt the pangs of illness in my stomach and the evening rapidly deteriorated from there. I spent the night half out of the tent decorating the cliff with half digested Latvian dumplings, a popular national dish. We both concluded it was a bug as we caught it days apart and so couldn’t be the food or water.

By the morning it was over and it was only fair that we cycle 45 miles to a campsite bringing our wild camping streak to an end. From arriving in Sweden to Latvia we wild camped a total of 22 consecutive days!

We quickly cycled through Riga, the capital of Latvia. It was a beautiful city and one I would like to explore without bicycles.

After Riga we wild camped along the beautiful coastline. We followed an old track towards the coast from the main road and discovered it led to an abandoned soviet camp, inside the huts many of the walls were wallpapered with Russian newspapers. We continued on and emerged onto a long, sandy beach. We camped amongst the trees to stay hidden and because camping in the sand dunes is illegal in Latvia to protect new plant life.

One of the great things about the Baltic Sea is that it has a much lower salinity (salt content) than other seas. The Mediterranean is 38 parts per thousand (PPM), and in comparison the Baltic is 35 PPM. Drinking water normally contains anywhere between 1 and 1000 PPM salinity, so the Baltic is nowhere near drinkable but we found it was fine for washing in without coming out sticky from salt. We normally washed in the the sea and then had another quick rinse with carried water to freshen up.

We were treated to another beautiful sunset over the Baltic Sea.

Part of our route took us along an unmade road, and if you have ever cycled in a hot country along an unmade road you know what torture it is. Fortunately this one wasn’t too busy, we were on it for about 45 minutes and only three cars came past. Each time they kicked up a huge amount of dust that we got covered in.

Despite the trials and tribulations of Latvia it remains my favourite Baltic State and the cake eaten and beaches camped will always be remembered. 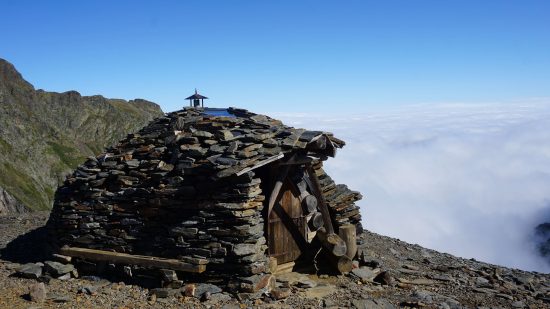