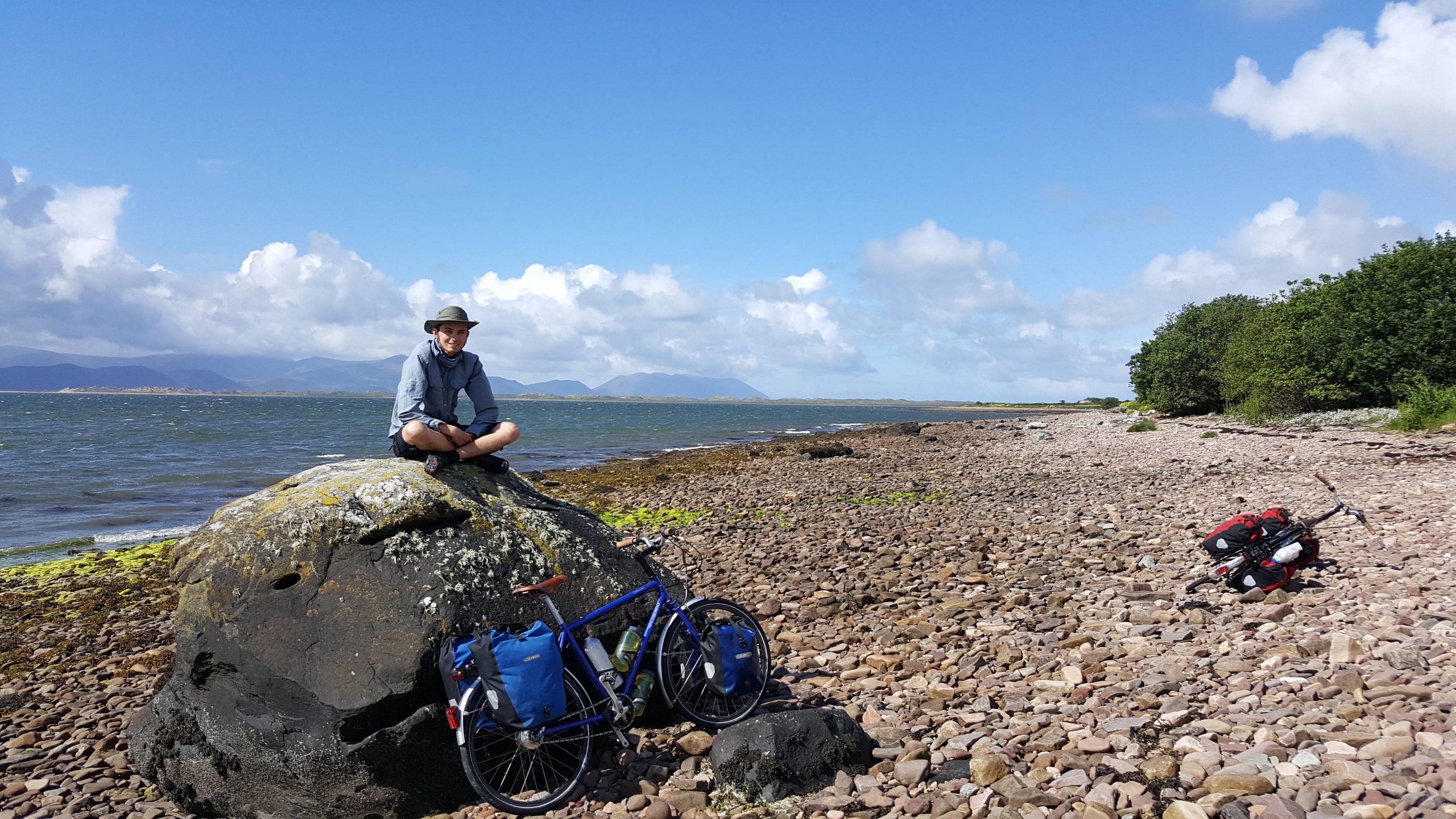 In my last post, my brother and I arrived in Rosslare and then cycled straight across Ireland to Killarney National Park. We encountered ruined churches, stayed with a friendly Irish family and explored an ancient priory beside a beautiful lake. It’s now day 9 of 34, only 25 days left until we need to be in Liverpool for a wedding!

We joined the Wild Atlantic Way at the start of the Ring of Kerry, a famous coastal scenic route. It was shrouded in mist and cloud when we arrived and the day was spent peddling gradually along in the rain.

During the day we cycled past a girl hitchhiking, she was on a hill sticking her thumb out so we said hello and apologised for not having any room then carried on. We then carried on pressing through the rain and got to the campsite around 5pm and what do we see? The hitchhiker in an armchair toasting her feet in front of the fire.

Despite the weather earlier in the day we were greeted by a fantastic sunset at the campsite at Mannix Point. I think as long as the evening is dry, rain is mostly survivable. It’s the endless wet that ruins holidays.

Perhaps the best view of the Ring of Kerry we saw was from Dingle Peninsula further up the coast. It was funny to see the places we had been at the day before covered in cloud whilst we were in the sun. 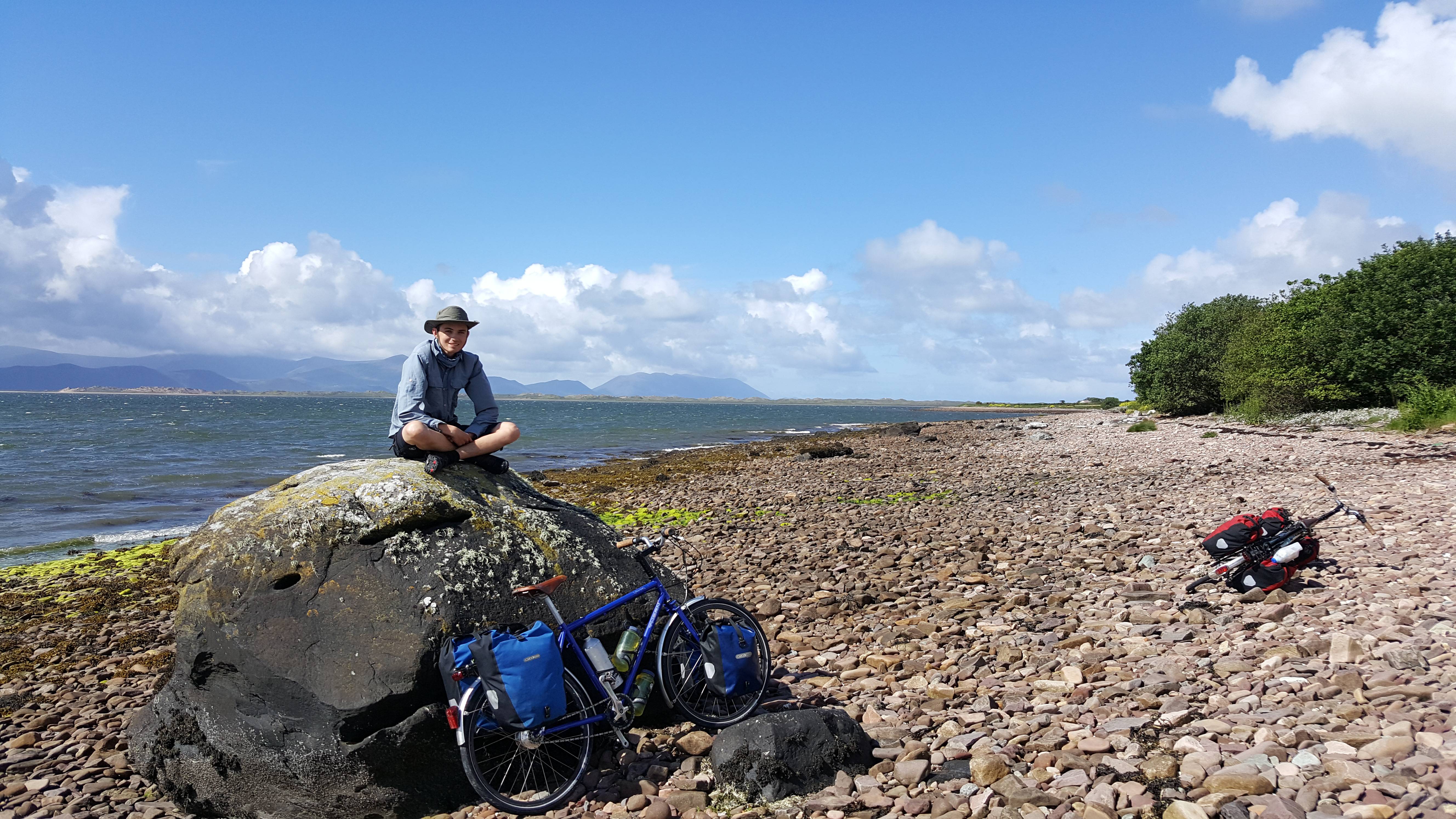 The colour of the sea weed on the beech was an astonishing green. 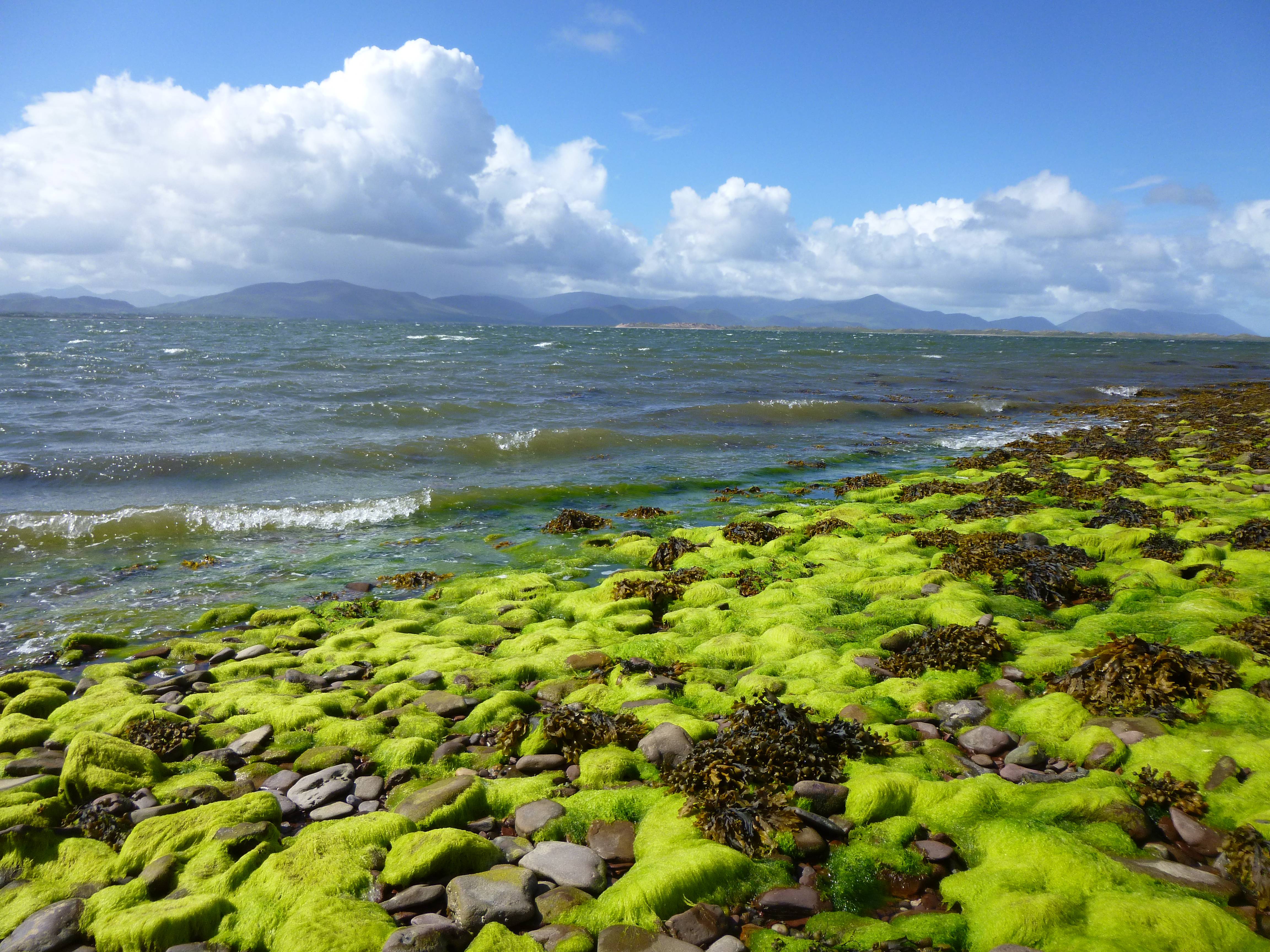 That evening we explored down a lane leading towards the sea and found a spot sheltered from the sea. 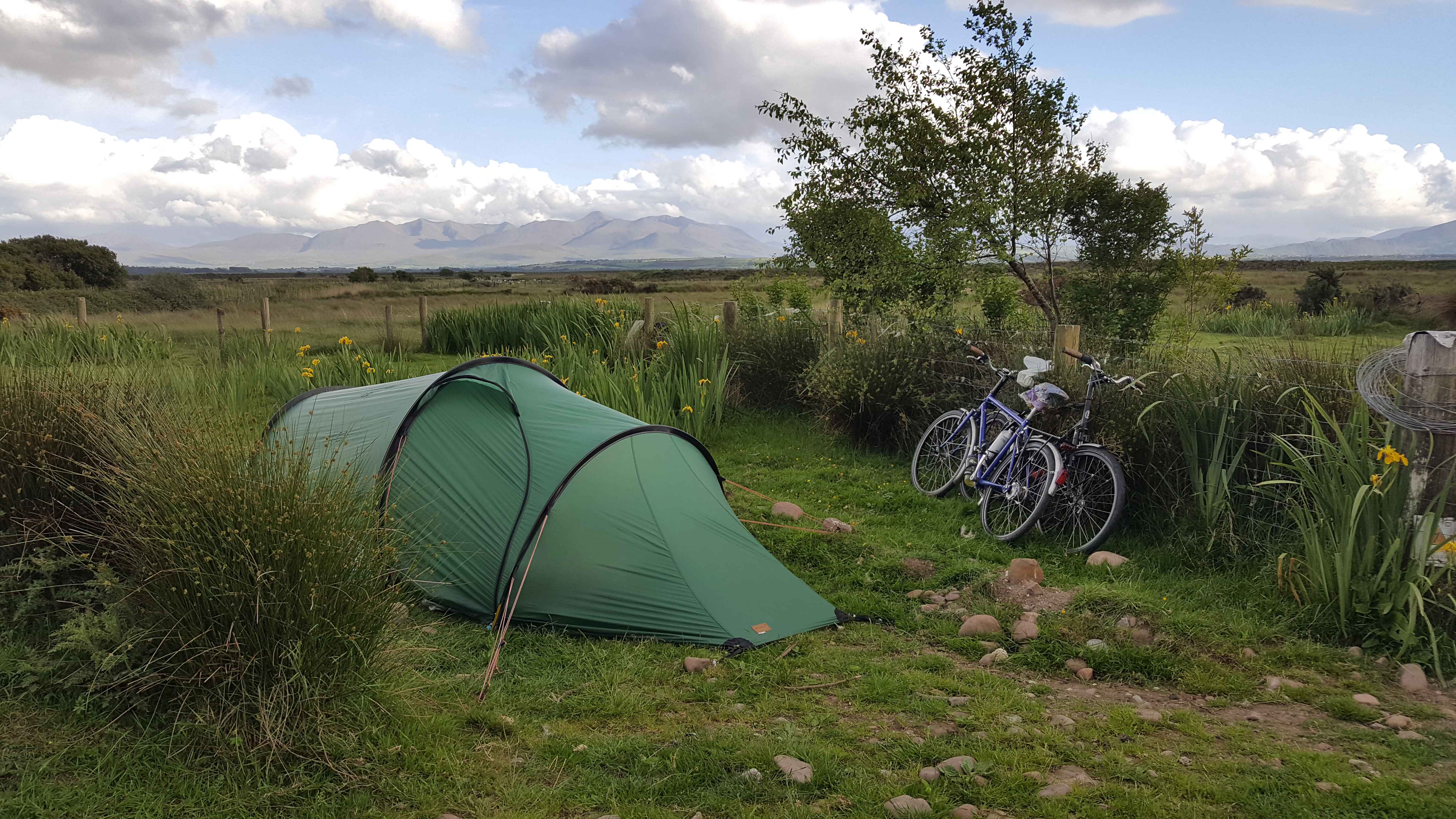 By the end of the tour we concluded that Dingle Peninsula is perhaps the most beautiful part of the Wild Atlantic Way, mainly because unlike the Ring it isn’t flooded by tourists. It is also the westernmost point of Ireland and so we decided early on to camp as far west on it as possible.

The wild campsite we found was just off to the right of the above photo… In another graveyard. Modern graveyards are a great place to camp, most have water taps, nice grass and tend to be out of view. We normally try to camp in a far corner in the unclaimed land.

The second rule of bicycle touring I came up with is:

‘Touring Tip 2: ‘If you camp in a public place, expect someone to come and use it for it’s intended purpose.’

And the story behind that rule is that we were boiling gammon for supper when someone came through the gate, they glanced at us then went to stand in front of a grave and pay us no more attention. We huddled down and tried to be invisible to avoid getting dragged into a conversation that would result in our eviction. A couple minutes later another two people arrived, then a group of three people, all standing in front of the grave. We shrunk down further and weathered their shocked glances. After fifteen minutes, they all filed back out one by one. And we both breathed a sigh of relief.

Later on we went for an evening stroll towards an incredibly twisty slipway winding down the cliff, which can be seen further up the page. We got to the slipway, and what do we find? A car, driven half way down the slipway before the driver realised that he probably shouldn’t be driving down a slipway designed for taking sheep to market from the nearby islands. The poor chap was hunting around for someone with the skill to reverse a car up a steep incline with multiple sharp corners.

We checked whether he was still there again at 11pm and fortunately he appeared to have found someone capable of moving the car. His plan had been to find one of the local fishermen so my guess is he found them.

The next day was a 410m climb up to An Chonair, and then one of the most perfect descents I’ve ever experienced. We knew it was going to be good when the climb up began with a warning sign “TURN BACK NOW”.

It was a narrow mountain road but one where you could see the next few bends ahead and so build up speed without the worry of crashing into a car. We pulled into a small layby at the bottom and gave a friendly wave to the cars behind us, who tooted and waved back.

It’s now day 12 of 34, only 22 days left until we need to be in Liverpool for a wedding! The next few weeks were spent working our way up the coast, carefully balancing the time we have left and what we want to see.