We started at Eylie in the Biros Valley for our second wild camping walk in the Pyrenees. The day before consisted of close monitoring of the weather forecast to ensure that it was worth while climbing up into the mountains. The next day was forecast drizzle but the day after it said “a glorious sunny day”. We decided it was worth the day of rain to climb to the top of the French/Spanish border and spend the next day basking in the Spanish sun.

The climb up was as I expected – walking in a cloud of drizzle with the occasional bout of rain. We parked at Eylie, a small mountain village that prior to 1850 was a poor small mountain village. In 1830 a vein of argentiferous lead (lead containing silver) was discovered and brought wealth to the valley. After walking past the main mine workings, we went up and up through misty woodlands and emerged on moorland hills surrounded by looming mine towers. 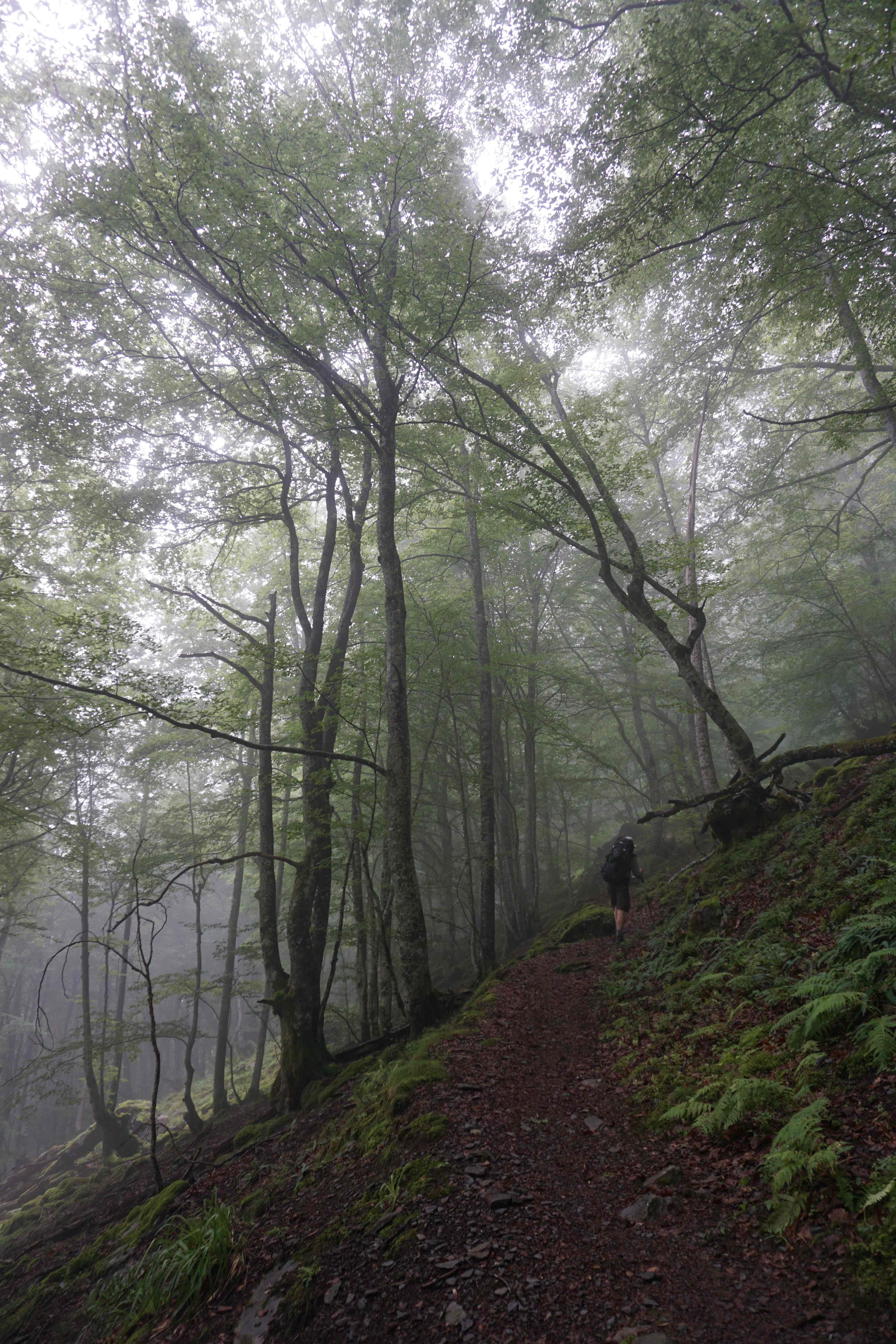 Due to the continuous presence of enveloping cloud, most of the mine workings were hidden from view and the desolate buildings and towers I could see appeared out of the mist, forgotten and abandoned. My camera was buried somewhere deep in my rucksack on the way up so I only took quick photos on my phone. 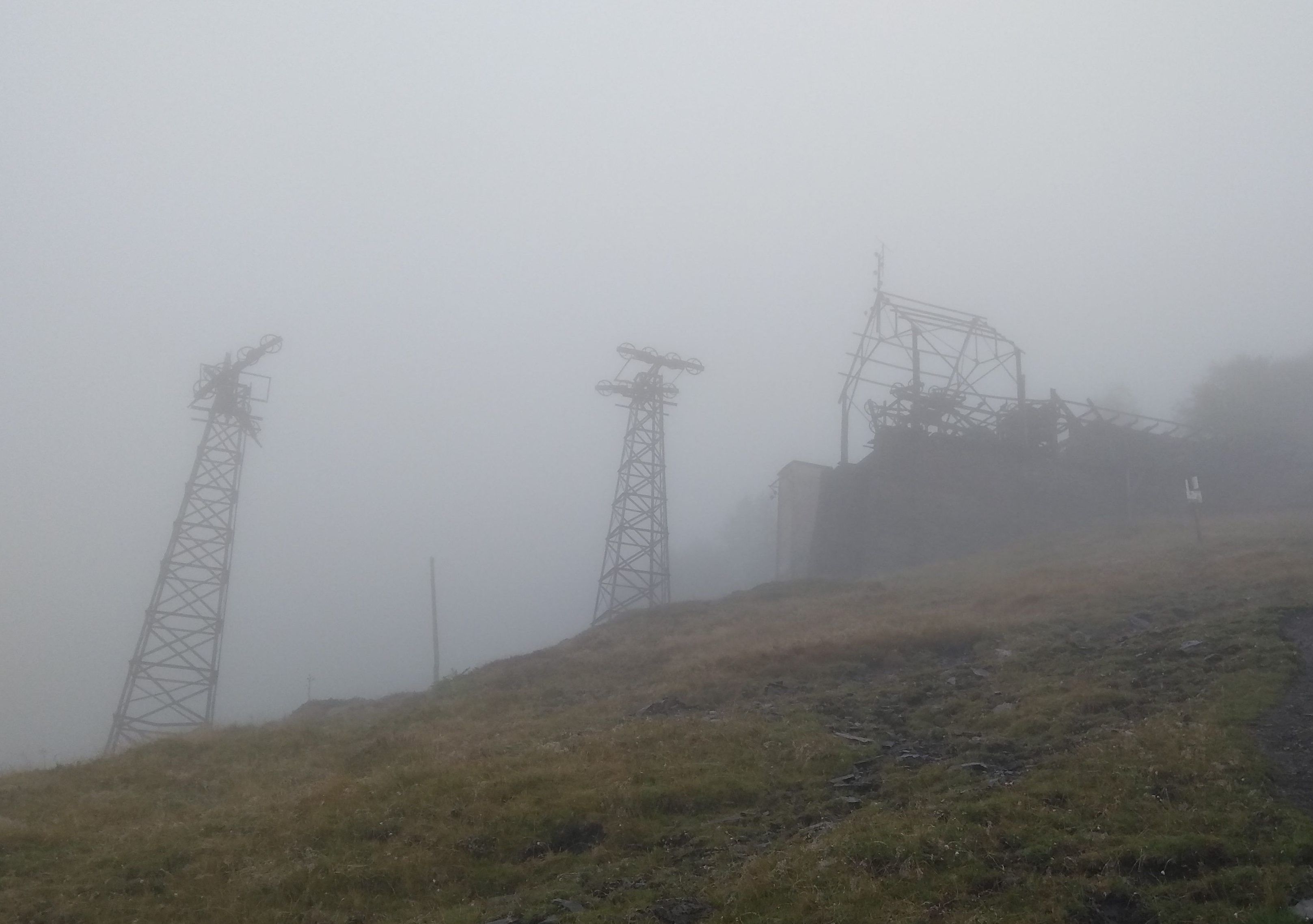 The long climb up to Col de Tartereau took all day, we left Eylie around 10.30am and reached the top at 17.30. As we drew closer to the top, I could see glimpses of the sun behind the cloud around us. Throughout the walk I had maintained an optimistic view of ‘this cloud will clear any minute and there will be a beautiful vista before us’. It slowly came true as we made the final ascent to the col.

View into Spain from the Col

We walked for another 30 minutes and camped beside a series of small pools below the col. The water was clear, but the bottom was a mix of grime and little stacks if muck from places best not to think about when it’s the only close source of water. One of the reasons we have spent many more holidays on the French side is that there is abundance of water, whilst Spain has less water. I think you have to make allowances for slightly grubby water when camping with a wonderful view.

After eating pasta with cured meat, Chorizo, and an onion in tomato sauce, topped by Comte Cheese, I washed and climbed to the top of the nearest hillock to watch the sunset. The other advantage of Spain is that sunsets are more common as you can see further west.

A sunny day in Espagne

The first night was absolutely freezing, when hiking and camping my pillow consists of a green fleece stuffed with my Rohan down jacket and other assorted clothing. The disadvantage of this setup is the colder it gets, the less pillow I have. That night I started off with a full pillow and by the early hours had no pillow at all and was fully clothed in the depths of my sleeping bag.

In the morning I awoke to “a glorious sunny day” as the forecast predicted. We decided to maximise time on the Spanish side and did a short morning walk to a puddle/lake below Tuc de Mauberme.

After a relaxing lunch I decided to climb to the top of Tuc de Mauberme, the highest peak of the Biros valley at 2882metres. The way up consisted of scrambling along scree slopes and around cliffs, and slowly meandering closer to the top. About half way I met some Spanish walkers coming down and they told me about Chamois hidden on the side of a cliff. Chamois are a mountain species of goat-antelope that delight in nimbly walking along sheer cliff edges. I took a wide loop around their mountain and scrambled to an adjacent cliff to watch them.

The climb to the top from where we camped took 50 minutes, including the 15 minute detour to look at the Chamois. I sensibly left my rucksack at the bottom but I still felt it was a pretty good time, considering it is 350 meter climb over 1km.

In the evening I climbed half way back up to Tuc de Mauberme to watch the sunset. It was a different kind of spectacular compared to the previous night, instead of masses of flowing cloud I could see for miles and each valley was lightly silhouetted against the one after it. 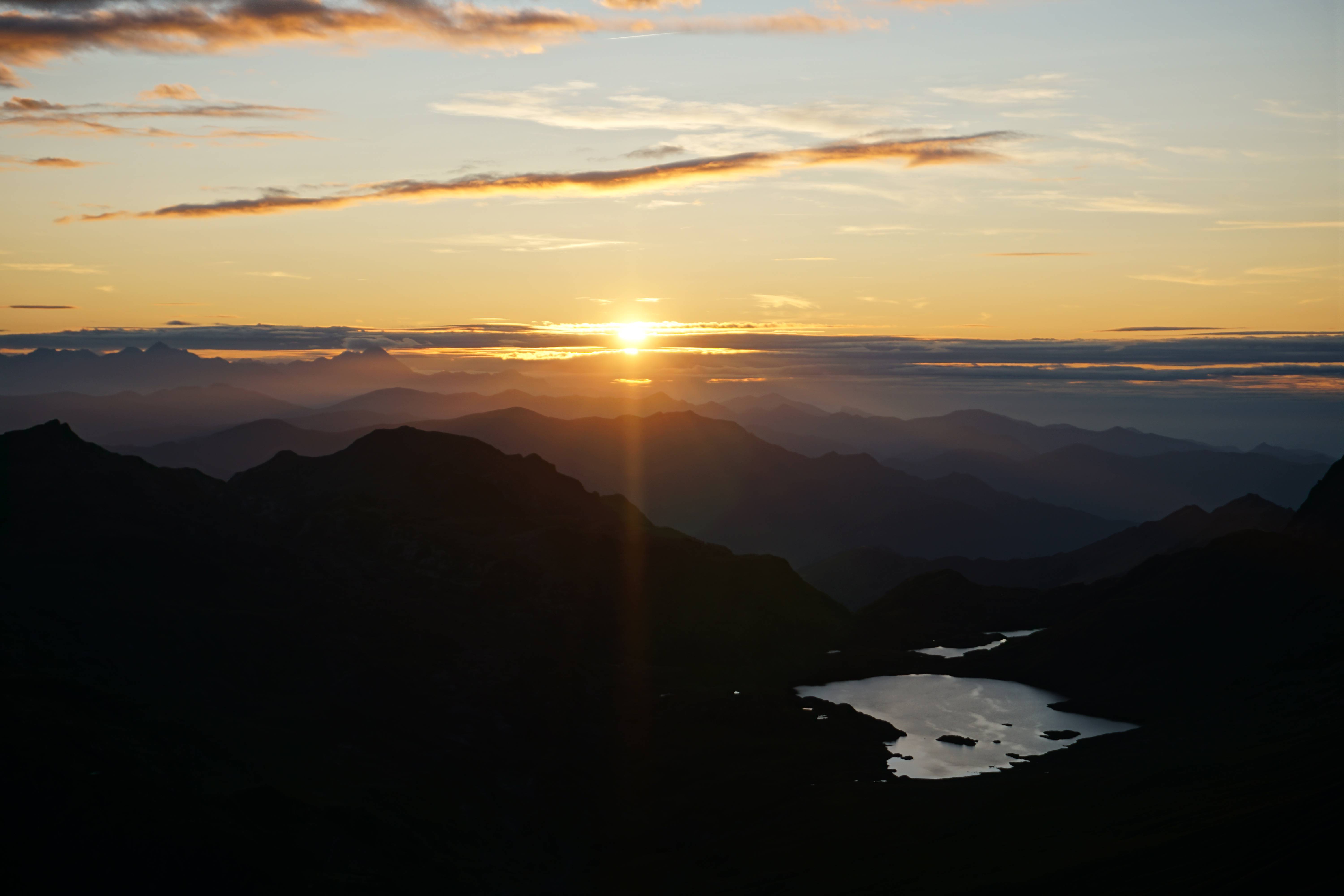 A carpet of cloud

I went to sleep expecting to wake up to drizzle and a view similar to what we came up in (that is, no view at all) but instead was greeted by another sunny morning.

A few years ago I joined my father and brother a few weeks into the holiday. One of the photos they showed me was of them on top of a mountain with a floor of cloud covering the valley. Since then I’ve always wanted to stand above the clouds. The first part of the return journey to Eylie fulfilled that dream.

At the top of Col de Pic de l’Homme we found an endless carpet of cloud stretching over the entire of the French side.

It was an amazing contrast of beautiful weather in Spain and dismal weather in France. After a few attempts I took a (very long) panorama showing the clear skies on one side and the cloud on the other.

We then entered the cloud and started the long descent back to Eylie. The cloud was a bit more dry than it had been on the way up and so I kept my camera out.

Back past the mine workings

For lunch we stopped in a wooded spot next to the river in the ravine, I practiced photographing water using low shutter speeds to get that smooth water look.

The cloud had lifted around Eylie mine and we could see each ‘layer’ of the building against the mountain side. I think its that gradual stepping of the roofs that make it instantly identifiable as a mine. 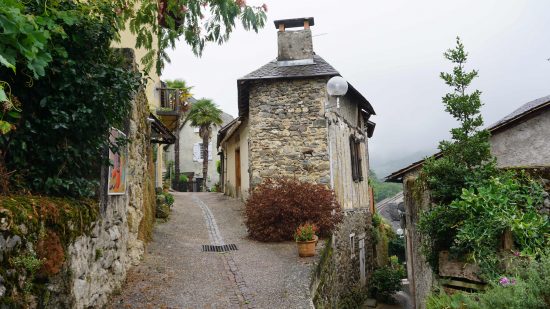