Precipitous backpacking in the Pyrenees

The first stage of my Pyrenees hiking trip was to get from England to France, and then into the mountains. I landed in Toulouse at 21.30 and spent the night at a hotel close to the airport. The next day we went to collect the hire car which my dad and I would share driving. The process went smoothly until the car hire lady asked:

“Are you over 26?”
I replied no, I am 23.
“OK then, for insurance laws it will be 36 euro for under 26…” and paused.
I thought that sounds reasonable, unexpected but still worth getting.
“… A day” she finishes.
That’s a bit much I respond and so it was decided I will not be driving the car for this holiday. My father will have to do all the driving so at least we’re not completely stranded.

We drove to Sentein and met up with my younger brother (who came out a week earlier) at the campsite. For the next step we planned a three day route through the valleys around Mont Valier. The first stage of the walk was to Cascade des Echelles, a fantastic waterfall tumbling down the valley. We stopped for lunch beside it and I clambered over it taking photos. It was a great waterfall for practicing the slow shutter/smooth water affect.

On the way back down the slippery rocks I spotted a tiny frog hidden amid the rocks. And then further along the path in the woods there was another one hidden under a rock. I remember being really excited to take a photo of my first frog a few years ago – this year I found them all over the place patiently waiting to be photographed.

We continued up 1300 meters to near the top of the valley. Thomas scrounged up wood from the scrubs scattered around and we cooked a one pot meal pot in the flames.

I awoke to a blanket of cloud in the valley below and our tent on its hillock sticking out like an island. There weren’t many trees around for a tarp, so a tent was definitely the right choice – read more about the different options for wild camping here: Tents vs Tarps vs Bivvy bags 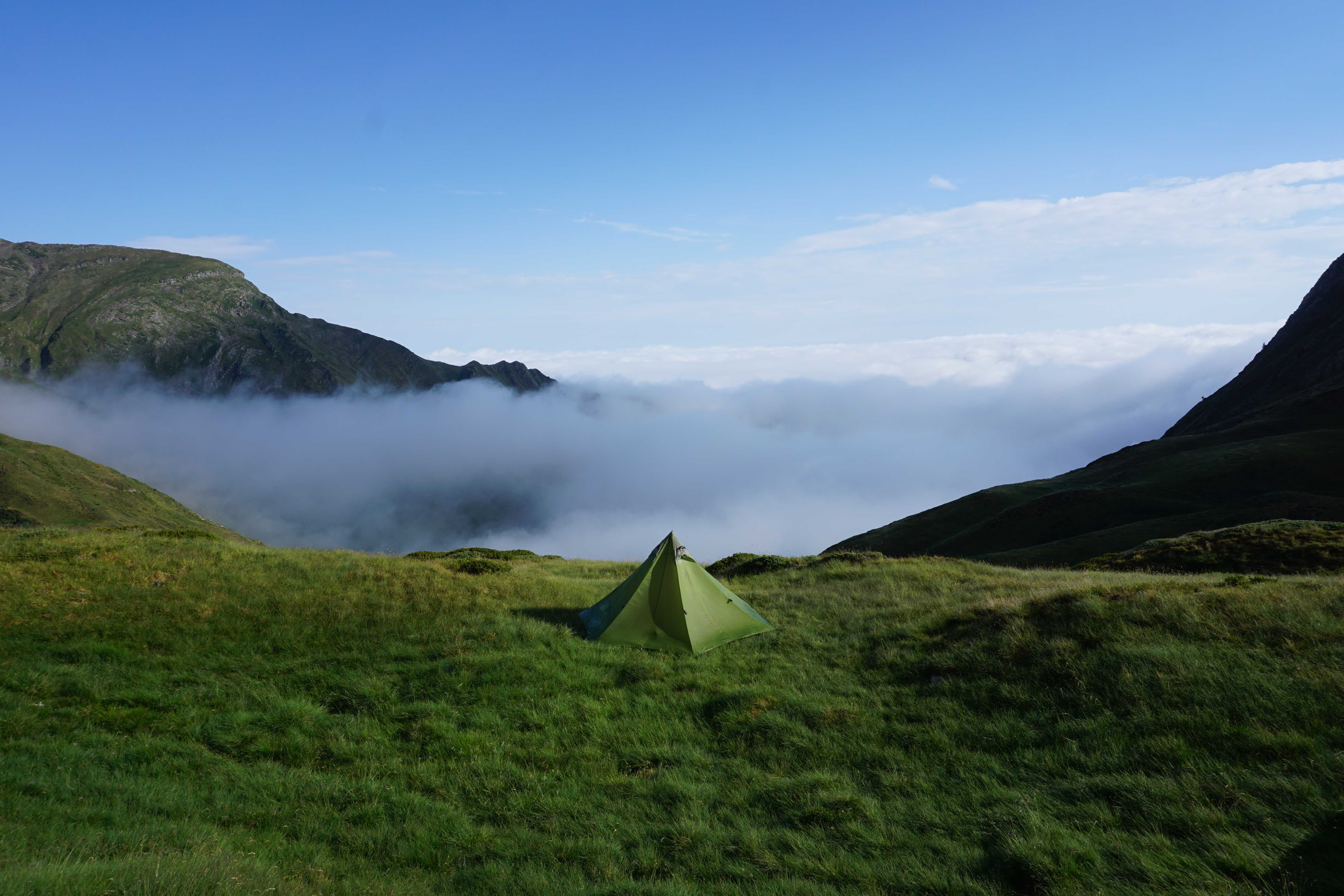 We continued hiking up to Col de Valier and towards the head of the valley spotted Chamois silhouetted against the rising sun and valley cloud. A moment later one of the vultures that live in the Pyrenees (not sure which) left its perch and swooped overhead – they are absolutely massive, the largest is the Griffon Vulture with a 2.3+ meter wingspan! I think that valley is one of my favourite mountain views, I have never seen one like it before.

After the Col de Valier it was an incredibly long slog back down the valley. The first lake on the route back down was Etang Long.

The route went along the cliff and was a precarious scramble using fraying wire ropes and a lot of balance. The lake was incredibly clear and also ridiculously deep, it would not have been pleasant to fall in. We undid our rucksack hip belts to be safe as to fall in with a full bag could mean being dragged down into the remarkably deep (and clear) depths.

The cloud dropped again and I couldn’t see anything for most of the descent down. There were a few more precarious scrambles, there is something very disconcerting about walking along a sheer cliff face but not knowing what is below you due to mist.

That evening we camped in the valley about an hour from the car, and once again lit a fire to cook supper on.

The following morning it was a quick walk back through the woods and to the car to restock on food and plan the next hike up into the mountains.